On April 29th, British boxing champion, Anthony Joshua will step into the ring at Wembley for the biggest fight of his life. He will face Ukrainian, Wladimir Klitschko for the IBF, IBO and WBA Super Heavyweight Championships of the world. Judging by ticket sales, fans are falling over themselves to get their hands on tickets for the spectacle, over 80000 have been sold and organisers are planning an extension in Wembley to accommodate an expected crowd of 90,000.

Promoter Eddie Hearn has confirmed the plans on Twitter. Such a figure would see the fight stand as the biggest in British Boxing history. Joshua has won all 18 of his professional fights by knockout while Klitschko boasts a career of 64 wins and only four losses. 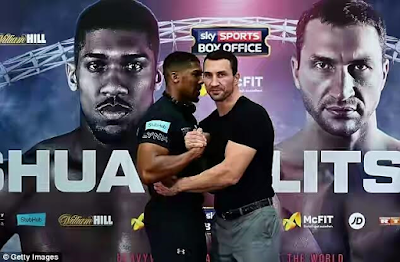 Woman heartbroken after walking in on her husband in bed with...

Boxing legend Muhammad Ali a pictures of himself as recovers from...

Mnangagwa washes his hands off over Mugabe’s threat towards protesters and...

Serena Williams twining with her daughter