The Indian boxer Amir Khan, 29 and his wife 24 year old Faryal Makhdoom Khan splashed £100,000 on their daughter, Lamaisah Khan’s second birthday party.
The birthday party which was held at Khan’s Bolton Wanderers football club had 250 guests in attendance. The party took Mrs Khan three months to plan and it featured Disney princesses, Peppa Pig, a real-life ballerina, a giant cake and a carousel.
In an exclusive interview with Hello! magazine, Amir Khan talked about his daughter’s 2nd birthday party. 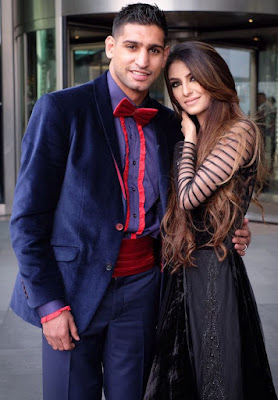 “When I walked in, the first thing I said was, ‘Wow!’ My wife did an amazing job.” “I was busy training when she was planning this, but every day I was getting crazy bills and thinking, ‘What’s this for?” “Every penny spent on my daughter is worth it, though. After all, all this hard work I do is for her, for my kid.”

His wife, Faryal Makhdoom Khan from New York said:
“I wanted it to be something really grand. Now I’m not doing anything until she’s 16.”

She also said she has adjusted to the UK following the couple’s wedding in 2013.
She added:

“I had a rough patch at the beginning when I got married to Amir,” she said. “But as I’ve lived with him, he’s showed me a lot of things I didn’t know about him.

“He is such a good guy, such a kind-hearted person. He’s the type of guy that would give up things for his own happiness to make his wife and child happy.” “Now we’re at a stage in our marriage where we’re the happiest ever.”

Mrs Khan said being a father has changed Amir and brought them closer.
“I’ve never seen this side of him. He comes home early – before he used to be out with his friends. But now he’s just like, ‘My wife, my child and home’.

Graphic- Wreckage of the Rusian plane that crushed in South Sudan

Jaden Smith kisses his girlfriend in the neck

Lady Gaga and her boyfriend of 5 years breaks up

Blac Chyna’s magshot after she was arrested at Austin Airport ...