A Chinese who woman named her clothing store ISIS and got some hot soup with the Chinese govt who launched an investigation. The Longgang District public security bureau then released an official statement saying that the new women’s apparel store named ISIS was not to be feared, that the owner, named her store Yisi Yisi, meaning “a token of gratitude” in Chinese and decided to shorten it to ISIS because it appeared more simple and fashionable. The woman has since removed the sign from the store. 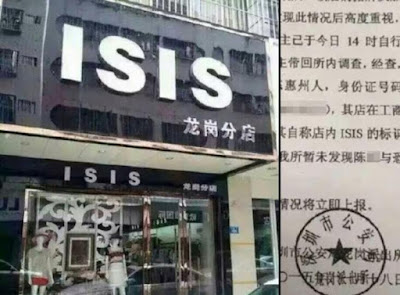 28 inmates killed, 4 beheaded, after fight breaks out between rival...

American College footballer charged with murder for killing his “girlfriend” upon...

Mother and son in hot soup after their sexual relationship was...

Cardi B stands with fiance Offset over homophobic lyric controversy

Actress Jessica Falkholt dies in hospital one day after funeral of...