The Democratic Party chairwoman, Debbie Wasserman Schultz is resigning under pressure as  a stunning leadership shakeup as party officials gather in Philadelphia to nominate Hillary Clinton as the Democratic presidential nominee. Wasserman Schultz’s announcement Sunday follows an outrage over hacked emails suggesting the Democratic National Committee favored Hilary Clinton during the primaries, even though she claimed she was neutral.
In a statement, Wasserman Schultz said she will step down at the end of the four-day convention which begins today. She said she plans to formally open and close the convention, as well as address delegates but didn’t address the email scandal. 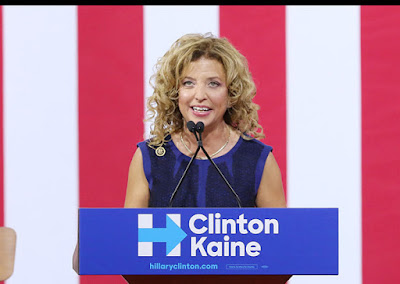 Sanders had repeatedly accused the DNC of backing Clinton during the primaries. He said the 19,000 emails published by the website Wikileaks appeared to confirm his suspicions.

In one leaked email, a DNC official wondered whether Sanders’ religious beliefs could be used against him, questioning whether the candidate may be an atheist.

Sanders pressed for Wasserman Schultz to quit as chairwoman immediately. He also suggested that Clinton’s choice of running mate, Virginia Sen. Tim Kaine, was a disappointment and that he would have preferred Massachusetts Sen. Elizabeth Warren, a favorite of liberals.

“His political views are not my political views. He is more conservative than I am. Would I have preferred to see somebody like an Elizabeth Warren selected by Secretary Clinton? Yes, I would have,” Sanders told NBC’s “Meet the Press.”

Elizabeth Olsen uncovered by the wind

Taylor Swift topples Kim Kardashian and Beyonce as the most followed...

5 people killed after 2 female suicide bombers blew themselves in...

Nicki Minaj explains relationship status after downplaying it on Ellen

Chloe Sevigny’s nude photoshoot that got everyone busy.

Michelle Williams not happy with MTV replacing her photo with Michelle...