According to a tweet released by his press secretary, Sean Spicer 13 minutes ago, she has been fired from her position and replaced temporarily by Dana Boente, US Attorney for the Eastern District of VA.

Trump also made a statement to confirm the appointment of Dana Boente as Acting AG. 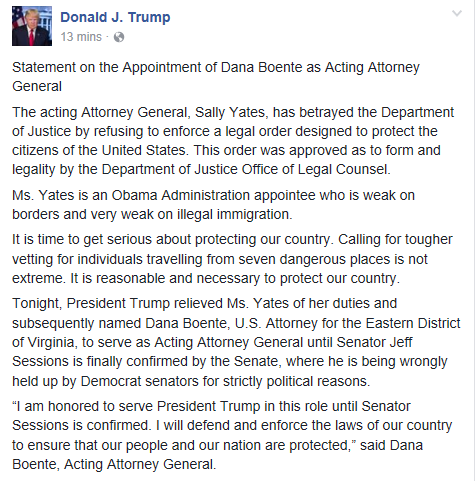 Pregnant woman dies after her head got stuck in railing

Dr Dre acknowldges beating women in the past

Trump mourns the death of Otto Warmbier who died days after...

Cristiano Ronaldo pays for medical treatment of the 370 people injured...

Nick Young settles with woman who accused him of rape in...

Syrian terror suspect arrested in Germany, kills himself in prison

Kendall Jenner has fired Mom as her Manager?

Hunter Shoots Woman To Death After Mistaking Her For a Deer