An Ethiopian man, Asmelash Zeferu has built a plane with tutorial videos on YouTube. 35-year-old Zeferu’s childhood dream was to become a pilot but he was rejected by the Ethiopian Airlines Aviation Academy and since he couldn’t realize his dream, he decided to build a plane. 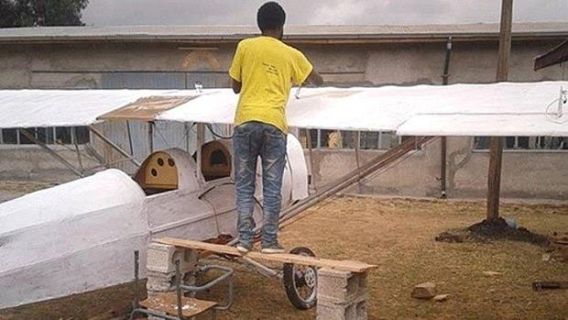 “I decided to build my own aircraft if I couldn’t be a pilot,” he told CNN. “Then I’d be able to fly high in the sky.”

For 10 years, Zeferu worked on his dream, salvaging spare parts from second-hand markets and handcrafting certain parts like the airplane’s wings. He then upgraded the 48 horsepower Volkswagen Beetle engine to 78 for his two-seater aircraft and settled for the wheelbase of a Suzuki motorcycle as his landing gear.

According to CNN, he did this with the help of some aviation experts, aircraft manuals and YouTube tutorials. He encountered some technical problems during the process. However, it didn’t deter the ambitious pilot from pursuing his goal. Five months later, he is ready to take off, again.

“My dream is to become an aerospace engineer at NASA,” he told CNN. “And I will be”

Zimbabwe to the Indigenization and Economic Empowerment Act

Here is the 79 year-old grandpa who claims he ha sex...

‘This is one of the true loves of my life-Kris Jenner...

Barack Obama called for jury duty in Illinois and he plans...

Check the lady who is claiming to be Nicki Minaj’s look-alike.