A Danish member of parliament tried to share a photo of Copenhagen’s iconic Little Mermaid statue on Facebook but received a rejection notification saying it could not be published because of rules on nudity. The rejection message shared by MP Mette Gjerskov on Facebook, which has now gone viral, says, “The image contained too much bare skin or sexual undertones”. 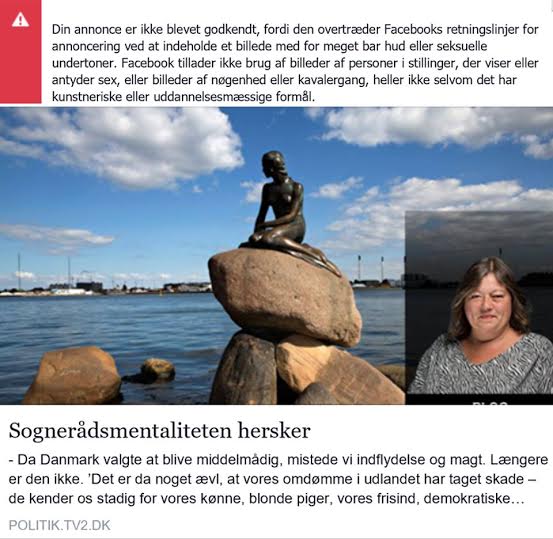 Facebook also added that the rules applied for images which have ‘artistic or educational’ purpose. However, it later relented and approved the image.
The social media giant had clarified its stand on nudity and its community standards in general on March 15, 2015.
“We remove photographs of people displaying genitals or focusing in on fully exposed buttocks. We also restrict some images of female breasts if they include the nipple, but we always allow photos of women actively engaged in breastfeeding or showing breasts with post-mastectomy scarring. We also allow photographs of paintings, sculptures and other art that depicts nude figures,” it said.
Facebook said that its harsh stand “can sometimes be more blunt than we would like and restrict content shared for legitimate purposes”. But from time to time it has encountered problems over legitimate posts.

Myth of apocalypse led 5 family to overdose drugs and died...

Man who killed his 4 children sentenced to 400 years in...

Lewis Hamilton hangs out with a lady in Barbados after hanging...

New Zealand’s prime minister is not married and pregnant, to go...

Man stabs a transgender woman 119 times minutes after having sex...

India’s first test tube baby delivered of her own baby by...

Muslim boy 14 arrested by police in Taxas after his homemade...