A 64-year-old Ghanaian woman was convicted for attempting to smuggle drugs into the US and sentenced to twenty seven months in prison by a New York City court.
According to the New York Daily News, Rose Amanor was arrested at Kennedy Airport after disembarking on a flight from Amsterdam last year. The search revealed she was travelling with three kilograms of heroin stuffed inside a haul of dry fish. She claimed her son duped her into carrying the bag into the city. 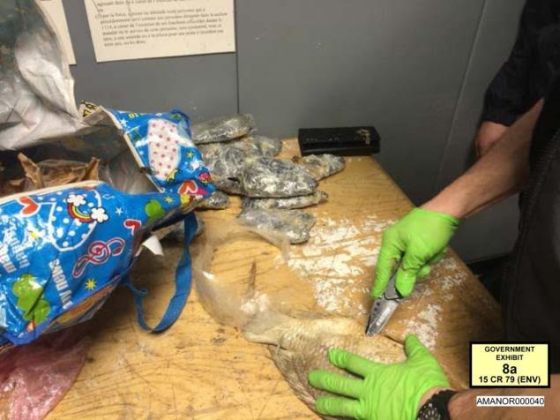 Her lawyers begged for mercy citing her advanced age and poor health, requesting a short sentence so she could return to Africa. But Federal Judge Eric Vitaliano was not having it, saying she had told ‘incessant number of fishy stories’
“I find it totally incredible that Mrs. Amanor didn’t know what it was that she was doing, Judge Vitaliano said. “It certainly was a disrespect for the law, sitting in this courtroom and spinning this incredible tale under oath.”
The judge pointed out that if Mrs Amour  had not been intercepted, the drugs would have wreaked havoc on young people.

In court, Amanor, who could almost certainly speak English, said she couldn’t, and requested a Twi translator. This was despite, as the Daily News put it: ‘that English is the national language of Ghana, and when she was arrested she was carrying two Bibles, a dietary nutrition plan, and other documents written in English, and had received numerous emails from her son written in English.’
Amanor begged the judge through the interpreter saying: “I am asking you to have mercy on me so I can go home to my family and enjoy whatever time I have left with my family

Amanor has served about 13 months since her arrest  and will be deported to Ghana after serving her sentence.

Adam Johnson’s girlfriend didn’t attend court with him today as his...

Saudi Arabian teachers shot to death by their colleague laid to...

Man paraded naked after being caught trying to rape an 8...

Keke Palmer reveals that she is “sexually Fluid” on Wendy Williams’...

Serena Williams steps out for the first public appearance since pregnancy...

Dictionary. com trolls US Weekly after they made an epic grammatical...

Former missionary sentenced to 40 years in prison for sexually abusing...

Alabama man who raped and killed a woman executed by lethal