A weary looking Hillary Clinton made her first public appearance yesterday since her concession speech following the shocking election loss to Donald Trump.
‘I will admit coming here tonight wasn’t the easiest thing for me,’ she said at the Children’s Defense Fund’s gala in Washington, D.C on Wednesday 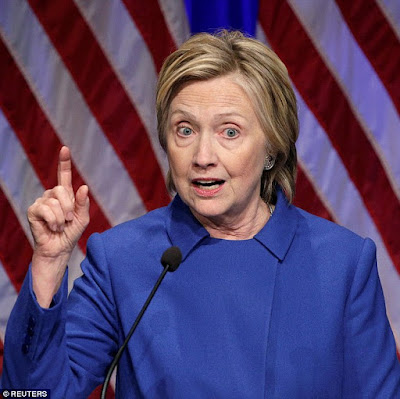 Clinton said she wished she could meet up with her late mum and tell her that her daughter will grow up and not just become a United States senator but also win more than 62 million votes in a U.S presidential election.
Clinton’s mum, Dorothy Rodham traveled by train to California with her younger sister to live with her grandparents, who constantly abused them, prompting her to travel back to her hometown of Chicago, Illinois to start up life, and Hillary said she wished she could talk to her while she was on that train.
She also implored her supporters, to “believe in our country, fight for our values and never give up despite the election results.
In her first public remarks since conceding to President-elect Donald J. Trump last week, Mrs. Clinton told the crowd she was struggling to recover from an unexpected defeat that she said had left nonwhite children and vulnerable people across the nation afraid.
“There have been a few times this past week when all I wanted to do is just to curl up with a good book, or our dogs, and never leave the house again.”
“I believe the measure of any society is how we treat our children, and as we move forward into a new and in many ways uncertain future, that must be the test for America and ourselves,” Mrs. Clinton said in a 20-minute speech.
“No child should be afraid to go to school because they’re Latino, or African-American, or Muslim, or because they have a disability.”
Introduced by Marian Wright Edelman, the group’s president and founder, as “the people’s president” and the first woman to win the popular vote, Mrs. Clinton, who had accepted the group’s invitation before the election, said she had had to overcome deep sorrow to keep the commitment.
“I know many of you are deeply disappointed about the results of the election. I am, too — more than I can ever express,” she said. “I know this isn’t easy. I know that over the past week, a lot of people have asked themselves whether America was the country we thought it was.”
“But we must believe in our country, fight for our values and never give up.”
“I dream of going up to her (my mum), and sitting next to her and taking her in my arms and saying, ‘Look, look at me and listen. You will survive. You will have a family of your own: three children,'” an emotional Clinton said, choking up.
“And as hard as it might be to imagine, your daughter will grow up to be a United States senator, represent our country as secretary of state, and win more than 62 million votes for president of the United States.”

African man kills his German ex-wife and their one-year-old child in...

Ronaldo warns as Messi’s contract saga with Barcelona hangs in the...

“I’m the best of the lot.”-Cristiano Ronaldo

Man who live-streamed himself raping dogs stripped naked and beaten in...