A 27 year old woman allegedly committed suicide by hanging herself in her apartment in south Delhi’s Defence Colony Friday night, March 27. The woman, identified as Priyanka Kapoor, was found hanging from the ceiling fan, said police. Her family blamed Priyanka’s husband Nitin Chawla, for her death, claiming that he abused her. He has been arrested and sent to judicial custody.
That fateful night, the former model’s mother was unable to reach her on the phone. When the family went to her residence, they were prompted to call the police after finding the door locked from inside.

According to the police, at 12.30 am on March 27, they received a call from Priyanka’s family members, who said her room was locked from inside and she was not responding to their pleas to open the door.

The sub-divisional magistrate is conducting an inquiry, said Prem Nath, adding that police had recorded Priyanka’s sister Dimpi’s statement. “Dimpi alleged that Chawla subjected her to physical and mental abuse over dowry demands,” he said.

A senior police officer said a two-page suicide note was recovered from the spot, in which Priyanka, reportedly said she was scared of her husband.
In the note, she said

‘This is the biggest mistake of my life… marrying him… I am scared’,” said the officer.

A case has been registered against Chawla under Section 115 (abatement of offence punishable with death or imprisonment for life) , 498A (husband or relative… subjecting her to cruelty), 304B (where death is caused by any burns or bodily injury or occurs otherwise) and 34 (common intention).
Police said Chawla, who runs a pub in GK II market, was facing financial problems. “He had not been able to pay his rent for the last two months,” said the officer, adding that the couple often fought over money issues. 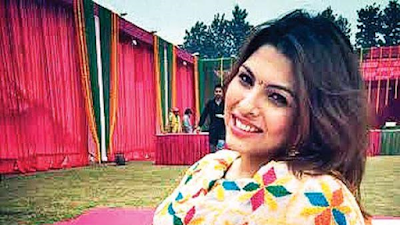 Priyanka married Nitin in January this year. She worked at an event management company and had met Nitin at his pub, said police. Nitin has two children from his first marriage and his son lived with him and Priyanka, said police.

Priyanka reportedly was not happy about this arrangement, said police. However, her family said this was not true as Priyanka loved children.

“I have known grief, I have known happiness, sadness and emotions, but my husband made me helpless for the first time” the note reads. “Nitin has a rape case on him registered in Mumbai. I never knew he would do so bad to me. He beat me like a devil just after a month of wedding. When I asked him to call my family he beat me hard. I had married Nitin just because he told me he loves me unconditionally. But now he asks me to leave his house. I broke my relations with my mother just because of him. He is a selfish man,”

Priyanka further goes on to write how she had expected to receive love and instead was only subjected to pain and regular beatings for petty issues. Priyanka also accused her mother-in-law stating that according to her, ‘whatever Nitin did was not wrong’.

“Nitin wanted me to leave his house, so I am leaving the world.”

According to senior police officials the couple used to fight a lot as was confirmed by some neighbours as well.

“The accused had also not paid house rent and as a result confrontations between the couple had ensued. He also had issues with her going to clubs. When Nitin’s 10-year-old son from his earlier marriage came home, Nitin had an argument with Priyanka. He asked her to leave the house,” said the officer.

The suicide note also states how the former model spent her last moments waiting for her husband.

“Nitin has not come home since the last three days and only sent a message on WhatsApp to vacate his home,” the note reads.

Mother reunites with daughter she thought had died at birth after...

Man goes viral after sharing a note from a ‘male and...

“Let us not allow television to take away the time of...

Saudi security forces caused the stampede by fencing off walkway &...

Indian farmer squeezed 2 goats out of a snake