On Thursday, December 13, Kanye West shared hundreds of tweets where he said Drake “called trying to threaten me.”

so drake if anything happens to me or anyone from my family you are the first suspect. So cut the tough talk.

Kim has now stepped in to warn Drake.

She tweeted at Drake, saying:

@drake Never threaten my husband or our family. He paved the way for there to be a drake.

My husband is the most brilliant person, the most genius person that I know. He has broken so many boundaries, everything from music, stage design, fashion and culture and will continue to change the world. 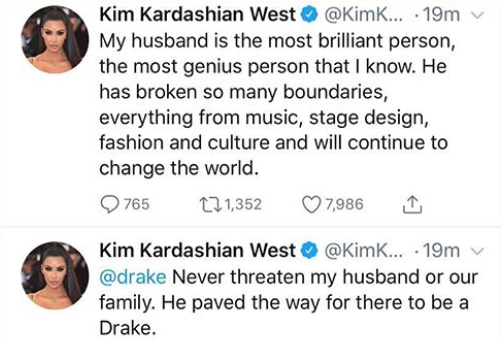 Here is why Kate Middleton Wears A Wedding Ring But Prince...

“Cristiano Ronaldo will win the Ballon D’Or, even if he doesn’t...

Chris Brown mad with his babymama for dressing their daughter like...

Graphic: Man kills his ex-wife, cuts her body into pieces