A Greenwood, Alabama man found a classic muscle car, a 1969 Dodge Charger Daytona rusting away in a barn roughly 60 miles south of Montgomery, sold it to a restoration specialist and now the car is set to hit the auction block where it’s expected to fetch a top bid between $150,000 and $180,000.
He discovered the rare muscle car when checking out another car nearby, and was pointed to the barn that housed the Daytona. After much convincing, the old man who owned the barn agreed to sell the relic. 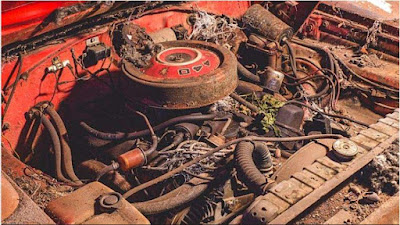 This car that’s covered in rust and moss with a tattered interior and an engine that likely doesn’t run anymore has such a high asking price because it’s an incredibly rare rust bucket, as Dodge made just 503 Charger Daytonas that year, most of which were meant to meet NASCAR racing standards.

The car, which has a flames painted on the front fenders, has a 440 Magnum V-8 engine with nearly all its original parts and a mere 20,553 miles on the odometer, 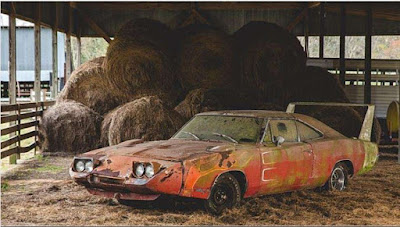 The car goes on sale next month.

Didier Drogba send condolence message to the families of the Ivory...

British man run over people on the pavements in Spain

Jay-Z and Beyonce fights over a secret phone call to Rihanna?

List of women who allegedly cheated on Boyence with Jay-Z

Man calls 911 to report his stolen cocaine, got arrested

Jaden Smith spends some quality time with his girlfriend Miami