A man who stopped traffic on one of Houston’s busiest highways to propose to his girlfriend may not get the happy ending he was hoping for.

Houston Police Department spokeswoman Jodi Silva confirmed 24-year-old Vidal Valladares will be charged with obstruction of highway, which is a Class B misdemeanor.

Silva said the charge is now winding its way through the Harris County court system. He will have the option of turning himself in, filling out the paperwork and immediately getting bonded out, she said.
It was unclear if the soon-to-be-wife or the friends who helped block traffic will be charged, as well.
In a video posted on Instagram, Valladares enlisted his friends to stand in front of lanes of traffic while he proposed to his girlfriend Michelle Wycoff in the middle of the highway near downtown Houston.
“I just wanted to do something different,” Valladares said. 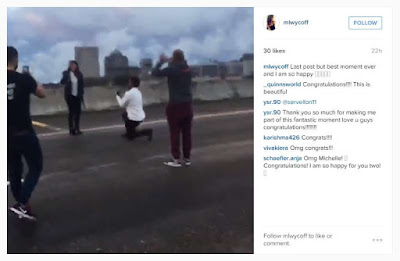 To get to a party Valladares made up as a ruse, the couple took the highway, which is one of Wycoff’s favorite spots. Valladares took her on a motorcycle ride on freeway on their second date.
That’s when Valladares told his girlfriend of a year and half to get out of the car.

“I said, ‘Are you serious?'” Wycoff said. “Then I saw all my family and friends with cameras and I looked where Vidal was and he was down on one knee.

“Honestly, I didn’t think about if it was a good idea or a bad idea. I was just so happy in the moment. I love him so much.” 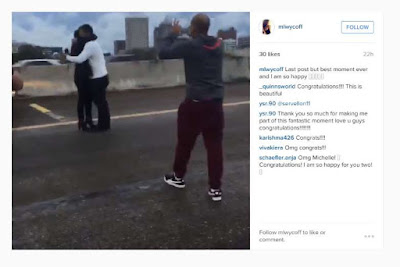 Valladares said his friends and family, who were following closely behind, stopped traffic for about 35 seconds while he popped the question

The hopeless romantic posted a photo of the proposal to Instagram with the caption, “When you shut down one of the biggest and busiest freeways in the entire country (I45) and you ask your girl if she wants to marry u, That moment is priceless love u #shesaidyes.”
While the hashtag implies she said “yes” and a hug quickly ensued after he dropped to one knee, The video can be viewed on Instagram. 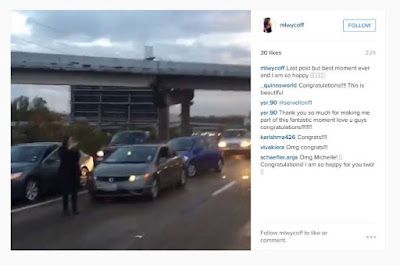 The charge came hours after Houston Police Department said they would not seek charges against the couple because police were not called to the scene and the situation was cleared before police could see it on patrol.

“It appears we were not called to the scene and it more than likely happened quickly before our officers saw it on patrol,” HPD spokesman Victor Senties said. “While we’re happy for the couple, this is not something we would want to encourage anyone to do. People could have lost their lives stopping on the freeway like that.” 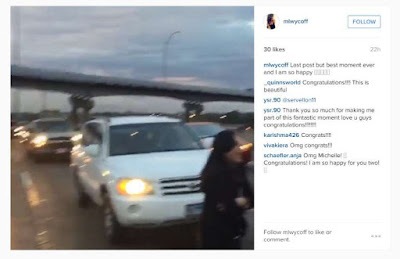 However, that won’t necessarily be the case for any copy-cats.

“If there was a similar scenario and the officers were called to the scene to witness it, the officers would tell them to clear the roadway and if they refused, they could be arrested with blocking a roadway, which is a Class B misdemeanor,” Senties said.

Texas Department of Transportation agreed that the act was both against the law and dangerous.

Iran is the first team to arrive in Russia for the...

Beyonce steers pregnancy rumors by covering her belly once again

French police on manhunt for 2 radicalized teen girls off to...

“I feel like I’ll probably get married again when I’m in...

The US military troops that stopped the train massacre in France

Some butt treat! Kim Kardashian in the streets with all butt...

Teen beheaded by ISIS for listening to Western music