A 42 year old man, Thomas McIntyre slashed his neighbour’s throat, 27 year old James Gunn, at his doorstep after complaining that the music from his housewarming party in his home in Glasgow was too loud and was keeping his child awake, according to the Daily Record reports.

The attack happened at James’ apartment in October 2014. He had moved to the property just weeks before.
James said he heard a knock very early in the morning at his door, which he answered, he said McIntyre told him ‘the music is too loud… I have been banging down to tell you to shut up’.” 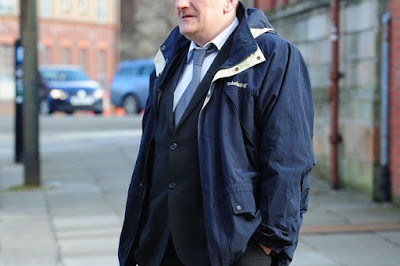 He said he apologized to McIntyre but didn’t expect what happened next. He said:

“He swung the knife and I stepped back when I saw it coming towards me. “It got me on the neck from the jugular down the jawline.”

He said he managed to slam the door shut, but then slumped into the arms of a friend.
He said:

“I saw that there was a lot of blood, so I screamed for help. My friend wrapped a shirt around my neck to stop the bleeding.”

Fortunately, James survived the attempted murder, he was rushed to hospital and required a number of stitches including one to repair an artery.

McIntyre went on trial last week accused of attempted murder but he denied the charge, stating he was in bed at the time of the attack. He said he would never complain about his child being kept awake as she could “sleep in a nightclub”.

However, a jury convicted him after five people recognised him as the knifeman who attacked James.
The 42-year-old was remanded in custody and faces a lengthy jail term when he returns to the dock next month for sentencing.

Kendall Jenner involved in a car accident in Cannes

Tupac’s mother is getting divorce and her husband wants half of...

Al-Qaeda names the terrorist who carried out Ivory Coast attack

Osama Bin Laden’s stepmother and sister among 4 killed after their...

Justin Bieber proposes to his 28 year old girlfriend in St...

Mother of suspended student for helping another student with his asthma...

Man fighting for dear life after being stabbed in the head...