A 50 year old woman, Juanita Gomez, killed her 33 year old daughter, Geneva Gomez, by shoving a crucifix down her throat because she thought her daughter was possessed.
According to police, Gomez allegedly shoved the crucifix to rid her of the devil which had possessed her body. Gomez made this confession  to police who had come to her Oklahoma City home Saturday afternoon on a welfare check. 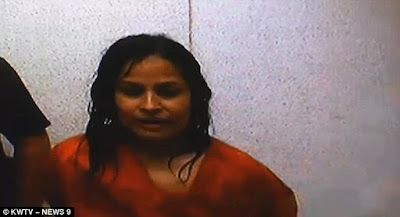 According to police, at 2:14 p.m. Saturday, officers responded to a welfare check at a home in the 1500 block of N. McKinley. When they arrived, they found the victim, 33-year-old Geneva Gomez, dead. She had trauma to her body consistent with homicide.

Investigators determined that Geneva Gomez was attacked by her mother after she confessed.

According to a probable cause affidavit, officers arrived at the home and found Geneva Gomez lying in the home with a large cross/crucifix on her chest. Blood was visible, and she had suffered severe trauma to her face and head.

Juanita Gomez told police her daughter was possessed by the devil and admitted to punching her daughter repeatedly and forcing a crucifix and religious medallion down her throat until blood came out of her daughter’s mouth. She said she watched her daughter die and then placed her body in the shape of a cross. She then tried to clean her daughter and other items in the home.

Juanita Gomez was arrested at the scene and booked into the Oklahoma County Jail on a complaint of first-degree murder. She’s being held without bond.

11 friends killed by a gunmen during a birthday celebrations

Mark Zuckerberg speak out over ‘Cambridge Analytica’ scandal that compromised 51...

US lifts ban on transgender people serving in the military

Christina Milian’s nipple jumps out at the premiere of Disney Channel...

Meghan is nicknamed “Di 2” by members of the royal household...

Man pretends to be his wife after murdering her

Stealing small potions of food is no longer a crime in...