British Prime Minister David Cameron last year called Donald Trump divisive, stupid and wrong for his proposed Muslim ban if elected as president. In an interview with Piers Morgan broadcasted this morning on ITV’s Good Morning Britain, Trump who is the pre-sumptive Republican candidate for the White House said that it seems he won’t have a good relationship with the UK prime minister when he becomes president. 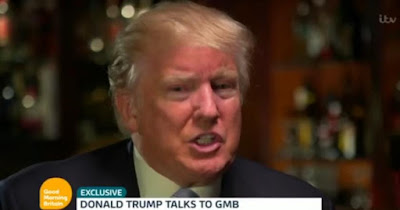 “I hope to have a good relationship with him but it sounds like he’s not willing to address the problem either,” he said.
Addressing the criticisms, Mr Trump said: “Number one I’m not stupid, I can tell you that right now. Just the opposite. I don’t think I’m a divisive person. I’m a unifier.”
Trump also warned new Mayor of London Sadiq Khan that he would remember his recent comments of him when he becomes president.
Trump had offered an exception for Khan from the proposed Muslim ban, but Khan rejected his exception saying Trump was ignorant.
“This isn’t just about me, It’s about my friends, my family and everyone who comes from a background similar to mine, anywhere in the world.” Khan said.
When asked about Khan’s rejection of his proposed exception to the Muslim ban, Trump said,
“I don’t care about him, it doesn’t make any difference to me, let’s see how he does, let’s see if he’s a good man,”
“Tell him I will remember those statements,” he added. “They’re very nasty statements.”
Watch the  full video below…
P

Wicknell flies business class because he would have to by 3...

The Weeknd cries while singing about his split from ex Selena...

Woman crashes her husband who dumped’s wedding to another woman in...

Malia Obama’s stalker detained for mental evaluation after he begged her...

Rita Ora shares stripes for her fans on instagram