A baby born prematurely to a couple who tried to conceive for 17 years and captured the collective heart of the world has reached his 3-month birthday.
In September, Dana Griffin-Graves of Dinwiddie, Va., secretly videotaped her husband Arkell’s reaction to the news that she was expecting, by having him look in the oven to discover a package of dinner buns.
Arkell’s dawning realization that his wife was five months pregnant was priceless — squeaky sobs leaked through the T-shirt he pulled over his face to hide his tears and it went viral. Footage of the video on YouTube garnered more than 10 million views. 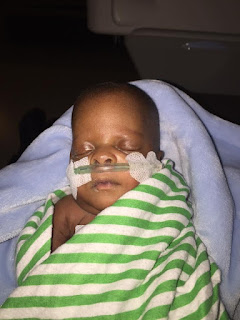 At that point, the couple had experienced four miscarriages and one stillborn baby.
The couple’s joy, however, was short-lived. A few weeks after the video was posted, Dana was hospitalized with sky-high blood pressure that put the life of her and her baby at risk.

“When I arrived in the intensive care unit over a week ago, they told me in order to save my life, I had to terminate his,” Dana wrote on the Facebook page devoted to her pregnancy. “… Daily I was told how my chances of survival were declining because of my heart functions and chronic blood pressure.”

On Oct. 20, Kaleb Arkell Graves was born at 24 weeks (16 weeks early), weighing in at 13 ounces. The age of viability outside the womb for a baby born prematurely is considered by most medical authorities to be 24 weeks, although one study has shown that with intensive care, some babies born at 22 to 23 weeks early have survived, though most with serious health issues.
Today, “Baby Bun”- the couple’s nickname for Kaleb – is 3 pounds 9 ounces and is breathing on his own. He has also become a bit of a celebrity with a devoted social media following of fans who daily offer him their prayers and encouragement. And many share stories of babies born prematurely who have grown into thriving teens and adults.
No doubt Kaleb will keep making progress. In October, Dana’s sister, Melanie Griffin-Hamlin, said “At 16 weeks early, it is a miracle, and the medical staff call [Kaleb] a fighter, while our family call him our blessing.”
Source: YP

‘Lionel Messi should be banned until FIFA proves he’s human’ –...

Trump tweet, was” Obama was too soft on Russia” and got...

Coup in Burkina Faso-military takes over the interim government

Suge Knight’s hit and run murder video is out