When Washington high school senior Drake Wilson came out as gay to his parents, they were supportive. His mother, Joan Wilson, put an ad in the newspaper to announce her son’s sexuality.

Here is what the ad said:
“The parents of Drake are pleased to announce that their son, has come out.
Drake is currently a senior in high school where he is captain of the tennis team, ASB Vice President, and NHS member.
He is a church deacon and enjoys film making and baking.
And yes, he adores Barbra Streisand.”However, she didn’t embarrass her son by placing the ad in a local newspaper.
She chose Houston, Texas. It was all about an attempt to change the narrative on gay rights, particularly in Houston. 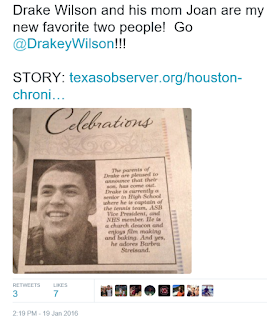 Houston citizens recently voted to overturn something called HERO, also known as Houston’s Equal Rights Ordinance.
The Texas Observer says that the ordinance would have “prohibited discrimination based on sexual orientation, gender identity and 13 other characteristics.”
So Joan Wilson penned the announcement and sent it to a Houston newspaper.
“We are blessed to live in a state which has passed anti-discrimination laws.”
“I couldn’t think of a better place than Houston, out of the entire country, where they needed to hear my message of pride.”
“My announcement was my way of humanizing the issue.”
“As a mother, I have much trepidation in thinking my son might one day live in a state such as Texas.”Joan Wilson also started a website called The Society of Lucky Mothers, which seeks to celebrate LGBT children.

Nairobi on alert after 6 lions escape from National Park 5...

Zimbabwean women comes for Wicknell Chivayo after he took a swipe...

10 year old girl dies while rescuing two toddlers from a...