Donald Trump’s wife, Melania Trump gave her first major address before the nation two days ago at the Republican National Convention and many were impressed until they realized the former model plagiarized a number of lines from first lady Michelle Obama’s speech at the 2008 Democratic National Convention. Now not only has Donald Trump addressed it but Meredith McIver, the in-house staff writer from the Trump Organization that was responsible for the speech, released a statement apologising for the ‘confusion and hysteria’ her mistake caused. 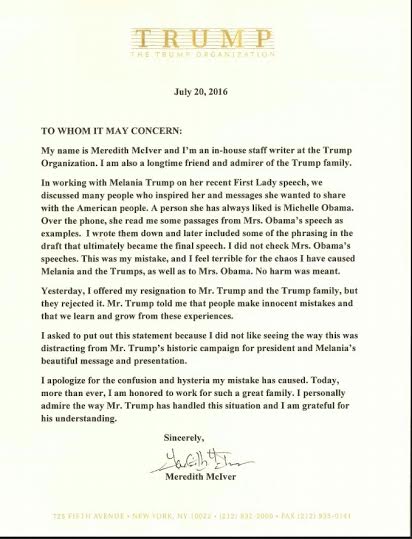 Libya requests World Cup replay after because the referee’s wife is...

Mother films her own murder

Teenage boy dug from rubble alive 5 day after the distarstrous...

Amber Rose and Blac Chyna’s friendship on the rocks? Cancel their...

Photos show African immigrants being thrown into the sea by a...

The Faces Of 3 Republican Senators That Oppose Plan To Repeal...