Azealia Banks has been dropped from a UK music festival following her racist, rude, homophobic and xenophobic Twitter rant against Zayn Malik. The Festival took to its twitter page to announce that she had been dropped due to her racist tweets.

She then criticised the festival, writing:
‘Which is why a U.S. rapper has been asked to headline ur grimey grime festival? Haha, enjoy the rain!’
Azealia had called the One Direction singer Zayn a ‘f**got’, ‘p*ki’, ‘refugee’ and ‘sand n**ger’ after accusing him of stealing ideas for his new music video from her work.
After staying silent for hours following the abuse, Zayn finally took to Twitter late on Tuesday night and asked:

‘@AZEALIABANKS why you been saying nasty things about me? I wasn’t talking about you lol.’ His response didn’t go down well with the hip-hop star who posted numerous replies to his one direct tweet. 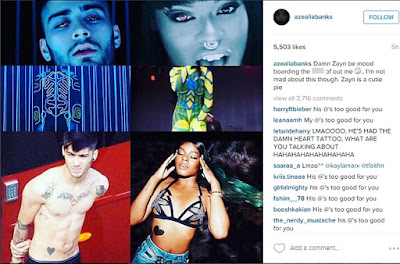 It all started when the controversial rapper shared a picture collage on Instagram of Zayn after he released the visual for his new single, Like I Would. Even though Zayn took inspiration from the Tron franchise, Azealia said he stole her work and posted mirror images from Zayn’s video and her own work.
She wrote:

‘No lies … I see you reaching but I don’t care.’ ‘My @’s too good for you.’ She just went ballistic after that.

‘U.S.A IS ABOUT TO TEACH YOU WHO NOT TO F**K WITH!! ‘When your entire extended family has been obliterated by good ol the U.S of A will you still be trying to

‘Act like a white boy pretending to be black? Do you understand that you are a sand n**ger who emulates white boys’ renditions of black male hood? ‘Do you know how lost and culture less you are?’

Zayn Malik is a Yorkshire-born singer to a Pakistani father and an English-Irish mother who was raised Muslim..,

DJ Zinhle confirms AKA and Bonang Matheba’s affair as cause of...

Congressman introduces the “COVFEFE Act” to require preservation of a president’s...

The Kardashian suspends their subscription apps because Lamar Odom’s condition is...

Kanye West finally choose the name of his new album

Rob Kardashian and Blac Chyna are having a baby girl