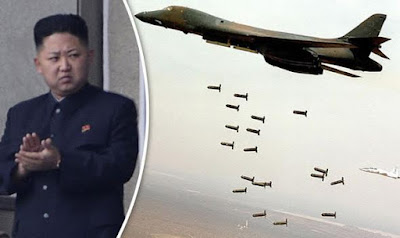 Around 300 US airmen have also been deployed alongside the B-1B Lancer bombers to Guam, a US territory in the Pacific Ocean within striking range of the North Korea’s capital of Pyongyang.
A spokesman for the US Airforce said: “The B-1 units bring a unique perspective and years of repeated combat and operational experience from the Central Command theatre to the Pacific.
“They will provide a significant rapid global strike capability that enables our readiness and commitment to deterrence, offers assurance to our allies, and strengthens regional security and stability in the Indo-Asia-Pacific region.” 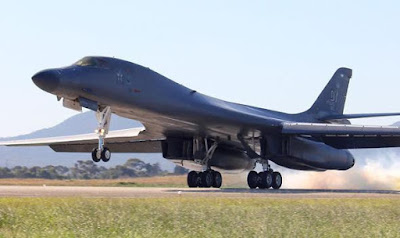 Along with declaring war on the US, North Korea also recently threatened to reduce Japan “to debris in a moment”.
Most bizarrely, however, has been the dictator’s order for border guards to kill snakes – amid ‘fears’ the snakes are spies working for his enemies.
A source from within Pyongyang revealed: “From early this month, border patrol units received orders to capture snakes before they crawl over the banks of Amnok River.
“The key message from the Party was that the South’s National Intelligence Service had released snakes as part of a ‘cunning scheme’ to challenge our unity.
“Under orders to capture the snakes before they reach land and hatch eggs, soldiers have no choice but to wade into the river to do so, naturally leading to complaints.
“Some grumble among themselves about the nature of the state’s claims, justifiably pointing out that not even a three-year-old would believe that the South would attack us with snakes over propaganda leaflets or CDs.”
Source: Express UK/ The Sun UK

Woman shot dead by police ex-boyfriend before turning the gun on...

“The situation is ripe to impeach Mugabe,” opposition parties

Thai woman who was tricked to traffic drugs in Cambodia by...

Check the sexy transgender who seduced loads of unaware men

Identities of people still missing from the deadly London fire

“It’s not true and it’s not correct to say Islam is...