Veteran British journalist, Clare Hollingworth, who broke the news of the Nazi invasion of Poland that marked the beginning of World War II, died in Hong Kong yesterday Jan. 10th at the age of 105.

Hollingworth’s death was announced in a statement released by the Foreign Correspondents’ Club of Hong Kong.
In August 1939, at the age of 27, late Hollingworth who was a rookie reporter with Britain’s Daily Telegraph, traveled alone to the German border and witnessed the first column of Nazi tanks mobilising to invade Poland.
Three days later she was the first journalist to break the news that launched her career. 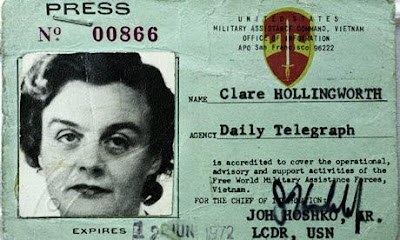 Clare Hollingworth having narrowly escaped death severally spent much of her career on the front lines of major conflicts including in the Middle East, North Africa and Vietnam while working for British newspapers

Transgender woman sent to all male prison fears for her safety

Mean man left a heartless message to a crippled veteran who...