Jada Pinkett Smith made headlines around the world by posting a video detailing her decision to boycott the Oscars.

But her husband Will Smith has revealed that he did not know about Jada’s stance beforehand – and only learnt that he would not be attending the Academy Awards when questioned by the media.

‘I was out of the country when she made the video,’ the actor explained on BBC Radio 1’s Breakfast Show on Tuesday.

‘I was in Thailand. And I get off of the plane and you know, the paparazzi were like, “Will, Will, you’re not going to the Oscars! What do you think about Jada’s video?”

“Um, I think, give me a second, let me call-” I had no idea. I had no idea and I’m like, “Babe, you gotta give a fellow a little heads up, you know? Just a lil something, just, “Hey babe, you know, hit me before you walk out of the airport.” You know, give me, give me something.”‘

‘I got in the car and Googled and watched the video,’ he added. ‘I was like, “Honey, is there anything you need to tell me?” She said, “Oh, I didn’t want to bother you on vacation.” 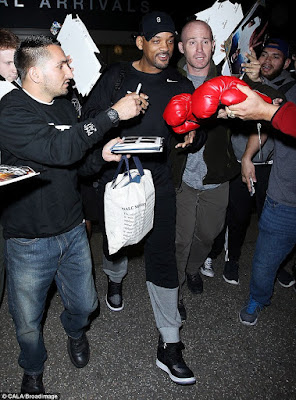 Will also clarified that the decision to boycott the Oscars was not about whether he personally received a nomination.

‘This is an issue of a really regressive trend, not just in Hollywood but in my country,’ he said. ‘It’s not about me or being nominated.’

Chris Rock’s opening monologue at the 2016 Oscars was epic

Police in South Africa have arrested a man with 21 pieces...

Here is why Khloe Kardashian named her daughter ‘True’

Ludacris and his new wife Eudoxiee expecting their first baby together!

Man proposes to a lady with 20 luxury cars and flowers-...